We asked Iain Macintosh to manage Newcastle United at Football Manager 2022 and it went really well for a while and then he fell out of all the trophies. But he seems okay now. energetic. Ready for action. Let’s see how long that lasts. 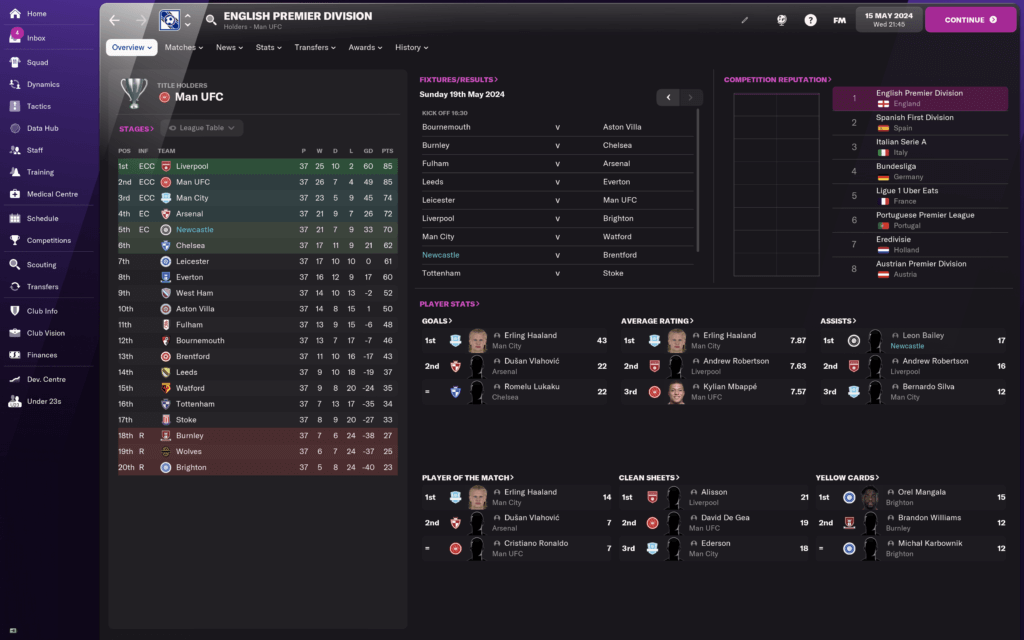 The task before us is simple. Well, it’s easy to explain anyway. Less easy to do. We need to beat Brentford at home and hope Arsenal don’t beat Fulham away. If Arsenal wins it’s over and we’re staring down the run of the Europa No-One Gives A Shit Cup. But if they make a mistake, we can fall.

We shouldn’t be in this position. We did really well in February and March but then two cup eliminations against Manchester City threw us off course and we lost to Stoke and Leicester in quick succession. But we beat West Ham, we held Arsenal and now there is a chance. Admittedly, hardly a chance. 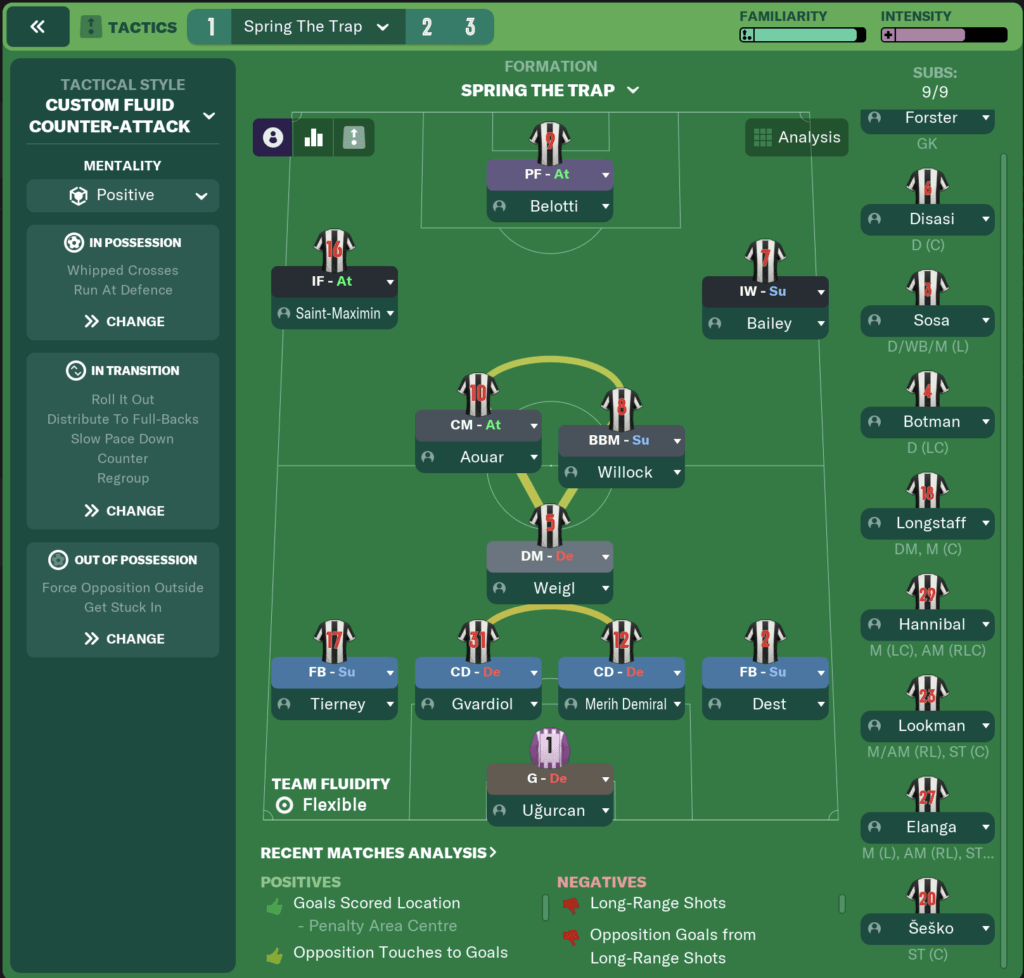 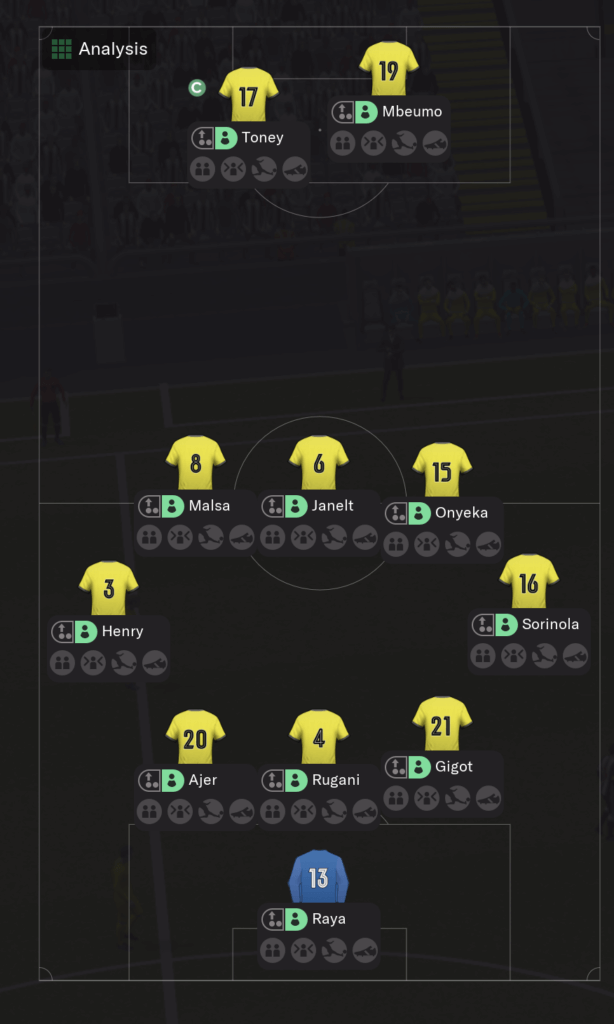 It’s a first half that goes almost without incident. A few half-chances from us, absolutely nothing from Brentford. It is quiet. Too quiet. So I’m not making any changes. And unsurprisingly, nothing happens in the second half either, until I notice a kind of commotion in the stands behind the dugout shortly after an hour. Shouting gets loud and the shouting spreads like wildfire, turning into cheers. A chant sounds from the crowds.

“That’s weird,” I remark to Steve Bould. “Who is Joao Mario and why are our fans trying to squeeze him into a song when his name clearly doesn’t fit?”

“Plays for Fulham,” Bouldy says absently. “They signed him a few years ago.”

“Huh,” I say as another passing motion collapses in front of me. “I wonder why they over-“

I look at Bouldy. he looks at me

“Damn it, Bouldy!” I gasp. “Fulham must beat Arsenal!”

“Yes, but we don’t beat Brentford! We have to sort this out!” he shouts. “What’s it going to be, boss? Are we getting spongy?” 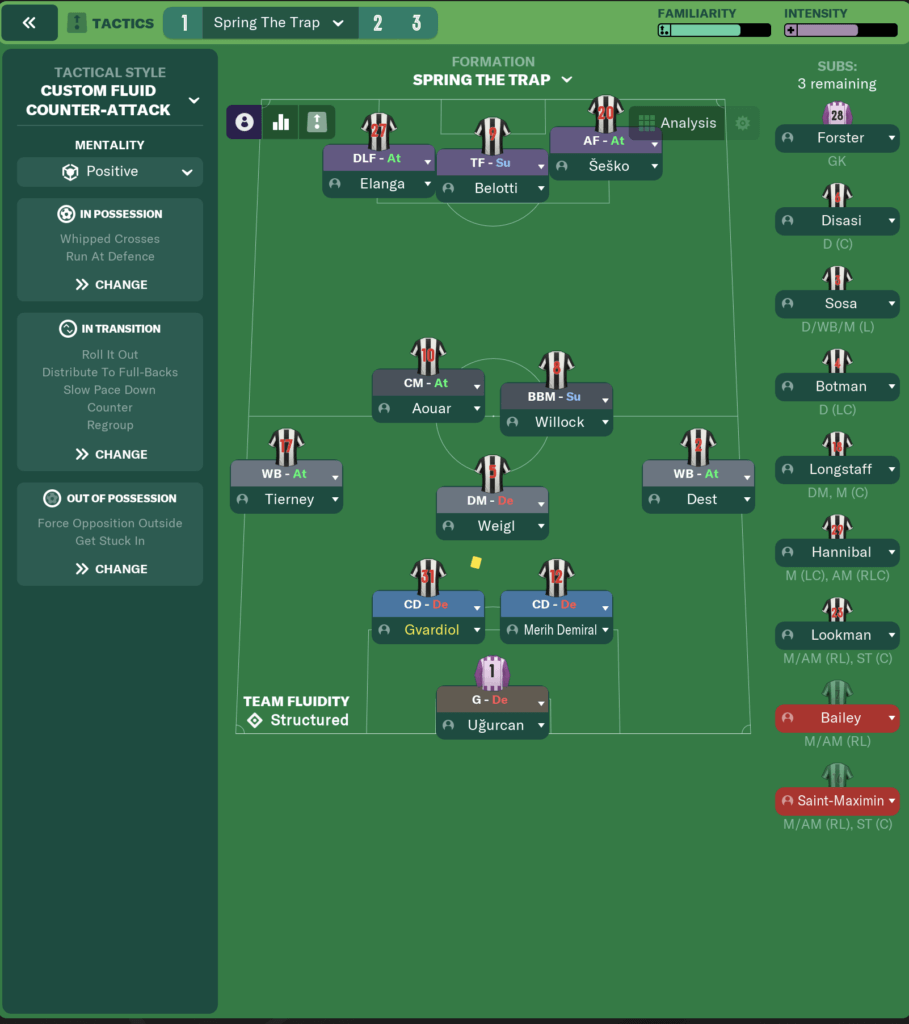 “This,” says Bouldy, “is completely insane. We haven’t even trained for it.”

“We don’t have to train for it,” I say. “We have Belotti there to make markers, Elanga there with Tempo to run from deep and Sesko there with, well, everything. Here we win, Bouldy.”

“This is where we’re taking our first step towards management in Scotland, more like…” Bouldy murmurs, but thank God he’s making the changes.

Brentford doesn’t know what hit her. They don’t have the energy or ability to track that many runners. We enjoy an extended period of pressure and then lose Kristoffer Ajer on a second bookable offense with 20 minutes to go. In the 79th minute, the dike finally breaks. Elanga tears down the flank, throws in a cross and Sesko is clear on the back stick to finish. 1-0

We keep making chances, Sesko burns and gets too close several times. 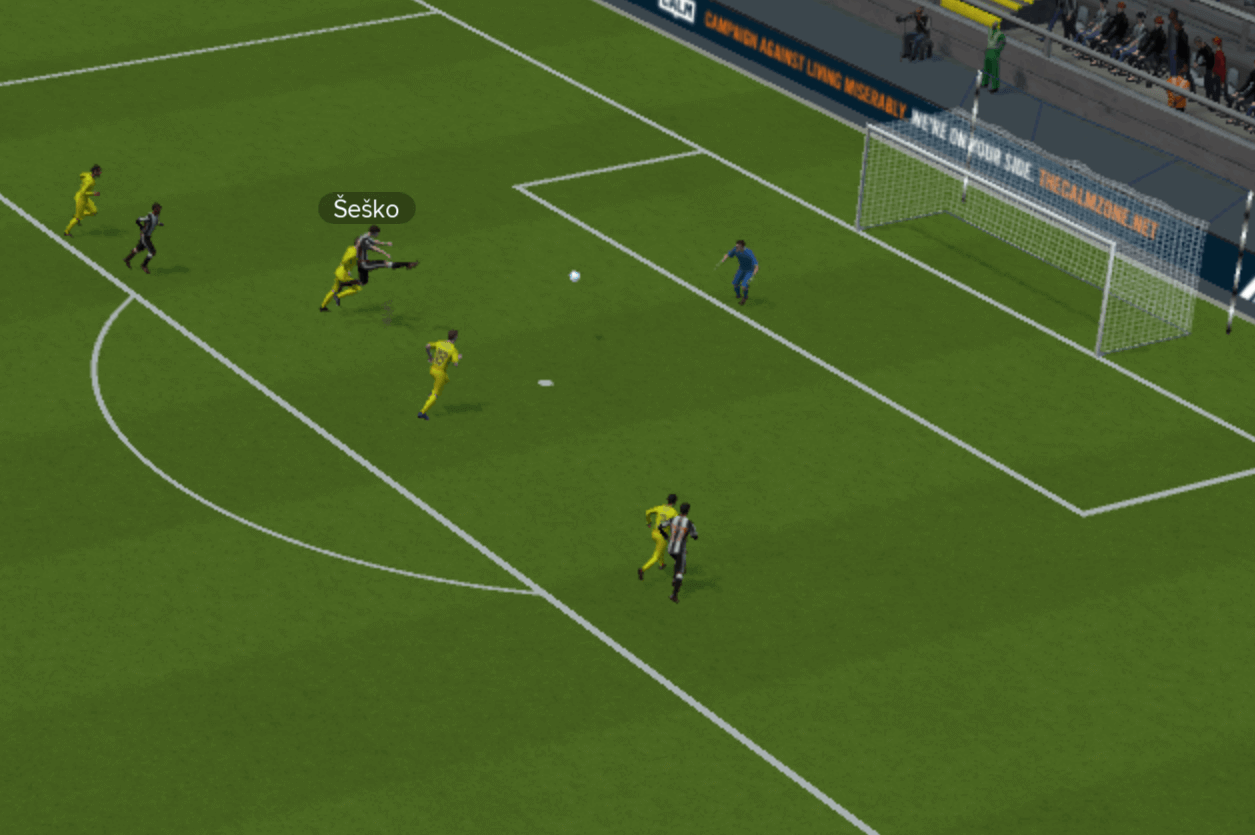 But I have to make a decision with five minutes to go. Do we shut it down and try to defend the win we need, or does that invite the kind of pressure that could ruin the whole season?

we close it We throttle back. We don’t quite clamp down on the bus, but we do tell the driver to get off and lean on the side, smoke a cigarette and let off some serious “I’m not going to move this bus” vibes.

Brentford jumps back off the ropes and comes at us. Rico Henry, exhausted, pushes up the right flank looking for options. He throws a tired cross into the box… and Ugurcan Cakir claims it with hands like gravity wells. The crowd roars as only a crowd can when a goaltender routinely intercepts in a time of high tension. Sensing the mood, the referee puts his whistle to his lips and blows the whole time.

“What about Arsenal? What’s happening at Arsenal?” I shout as fans flood over the billboards. But I’m swept away from Bouldy, carried by the supporters. My hair is disheveled, my suit is ripped and pulled. Everyone laughs, one man cries and another stands in the square, yelling at the sky and spinning his penis around like the rotor blade of a battered Chinook.

I think Arsenal lost then. 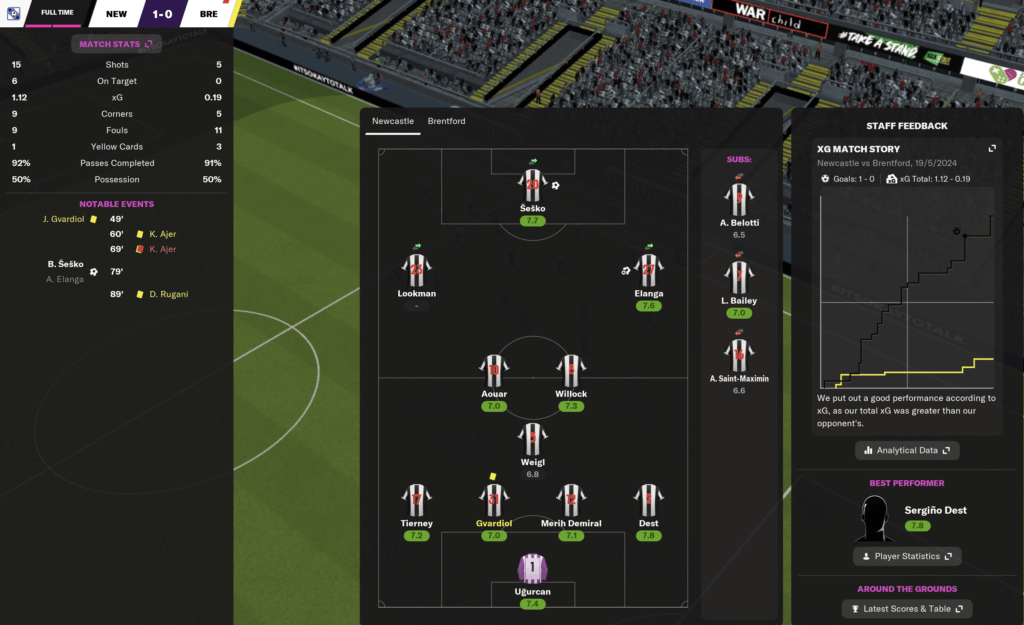 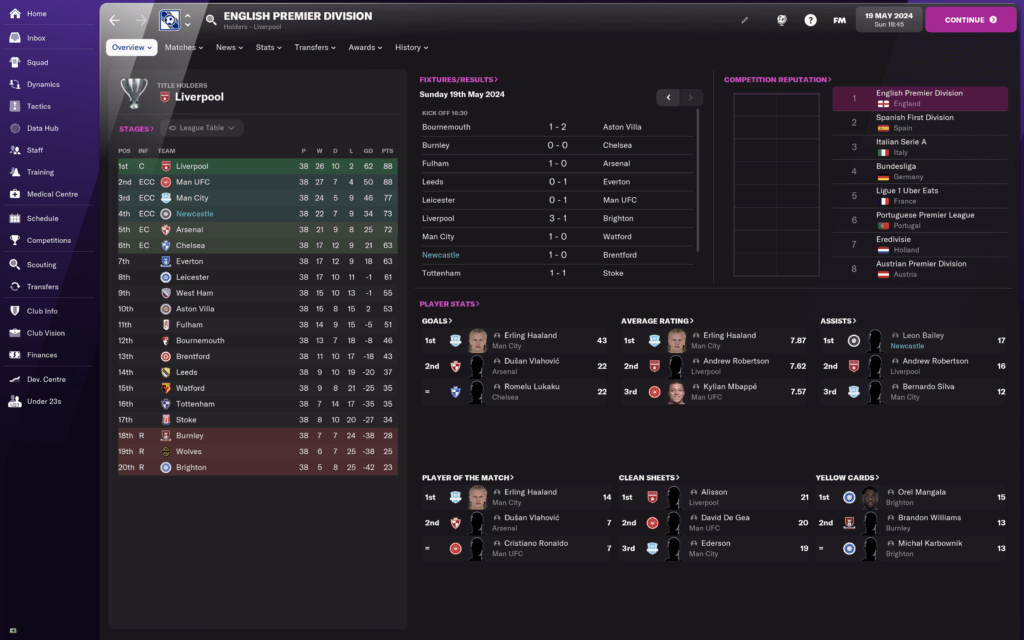 It was quite a long season, but we ended up exactly in the same position as last year. Fourth. That means we can put our noses back in the cash trough and it would be nice if the owners would let me have some of that money this year because I can think of some areas where we can strengthen. When the hangover is over and the players have been shipped to either Euro 2024 or Dubai, Bouldy and I go to the data hub and watch the campaign. 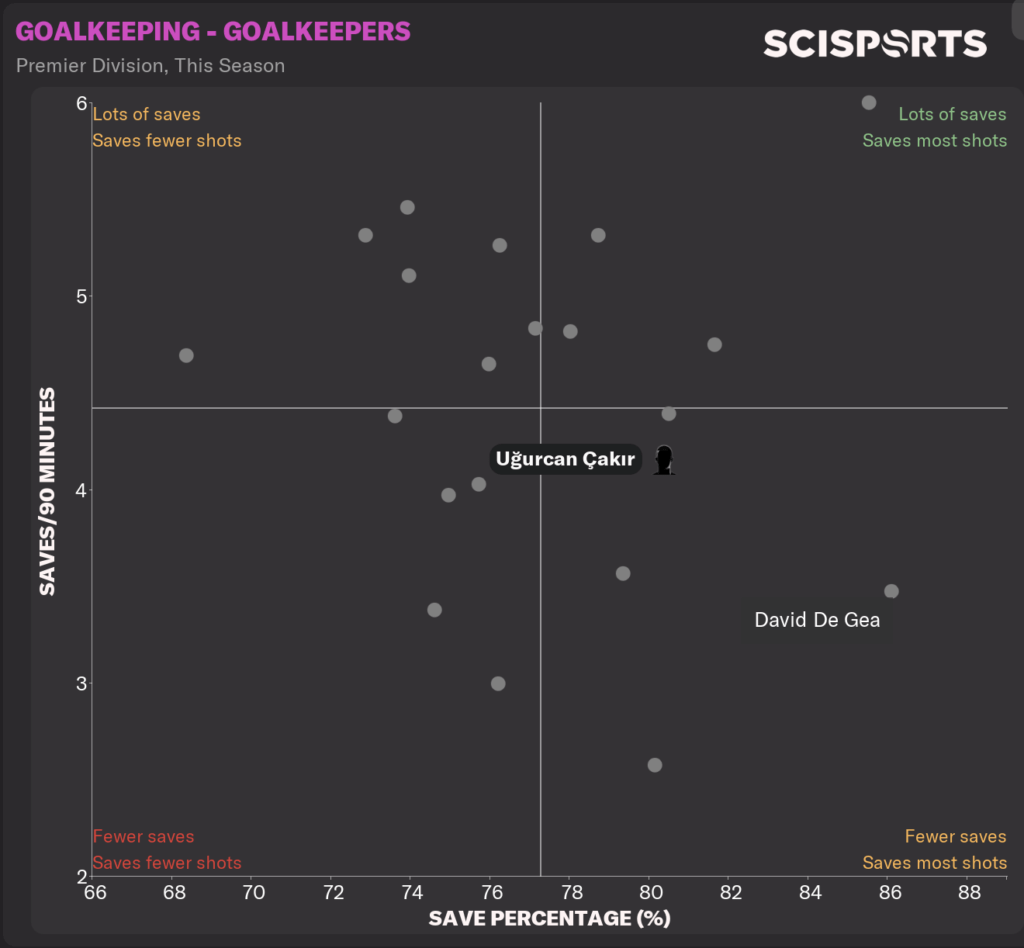 There is no escaping the importance of the Ugurkan cakir. He’s so valuable to the cause that I refused to rest him for a single game, which probably didn’t sit well with Freddie Woodman or Fraser Forster. But there’s no arguing with 21 clean sheets, a new club record. He signed up to 2029 and thank God for that. He’s the first name on my squad list in every way. 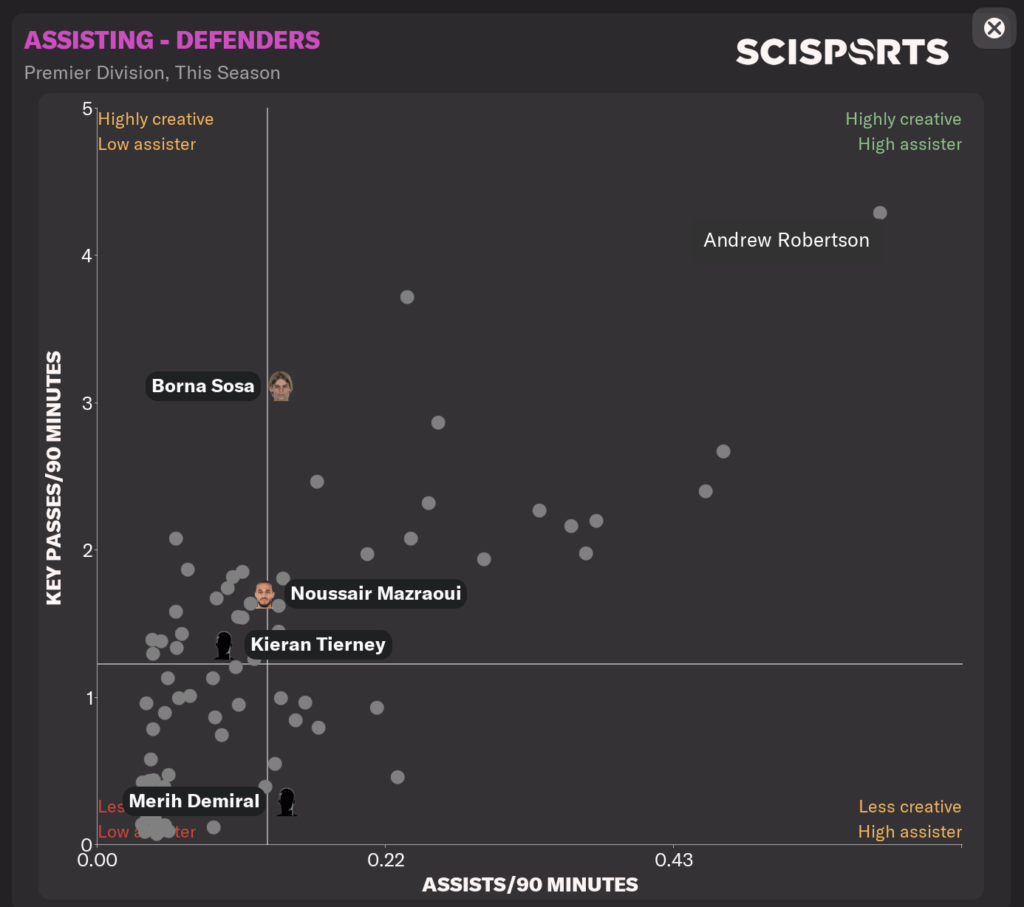 The full-backs have let us down this year. Partly because they’ve mostly been reduced to supporting roles as opposed to the all-action role they’ve occasionally played in the past. But partly because they had just gotten off their game. Noussair Mazraoui gets a pass for being so versatile he’s a key squad member and an option off the bench. But what do we do with Sergino Dest? He contributed six assists last season. This season…none. He’s sustained 16 serious injuries in three years, and that’s not counting the many times he’s had to be withdrawn due to minor issues. He offered something up front, he is the second most frequent dribbler. But that’s it. Are we staying with him for a fourth campaign, or are we upgrading? Kieran Tierney was an upgrade and one that paid off. He had a decent first season. I would expect more than two assists but at least he’s getting to people. Borna Sosa’s performances faltered while he sulked over the transfer policy but he recovered well towards the end. But this isn’t a department I’m going to particularly single out. 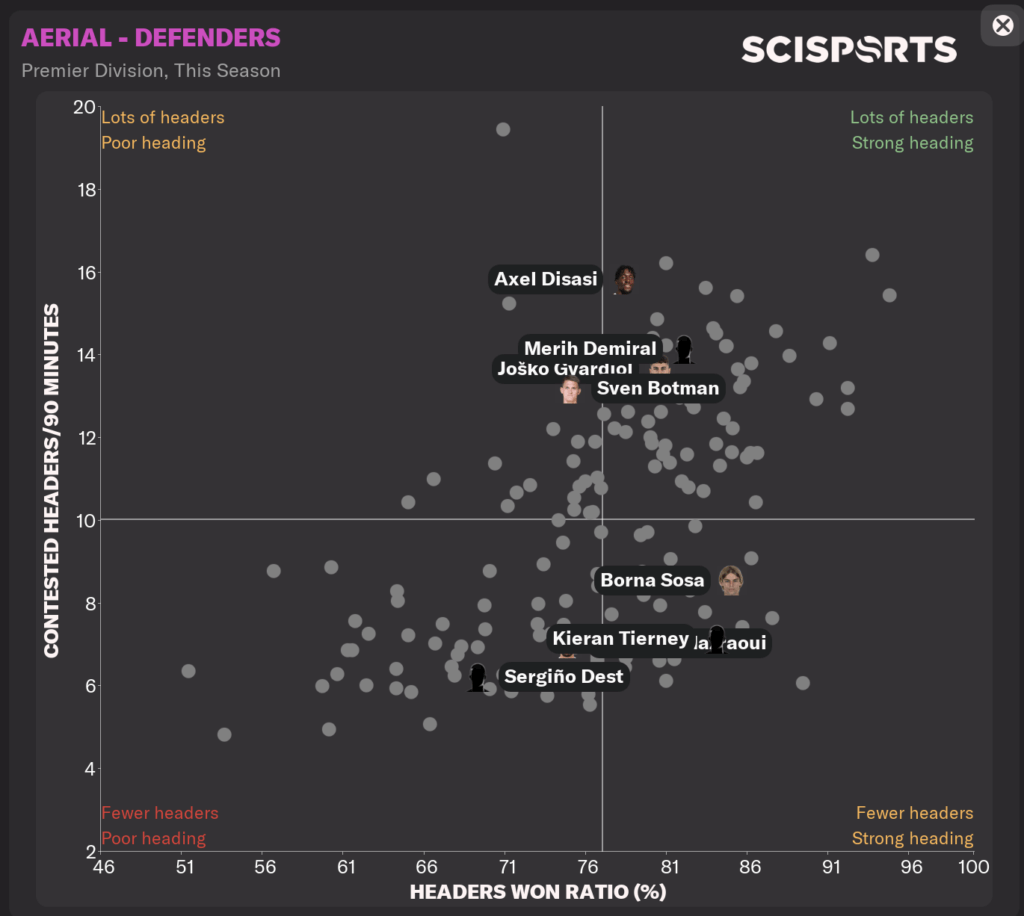 Life looks a little brighter when we study centre-backs. Josko Gvardiol and Merih Demiral were signed as upgrades and it proved to be the case. Axel Disasi came on although his average rating should be seen through the prism of his seven headed goals close to the post. Sven Botman, once my near-post hero, looked desperately short of the expected standard. Once again. He needs to be moved on. 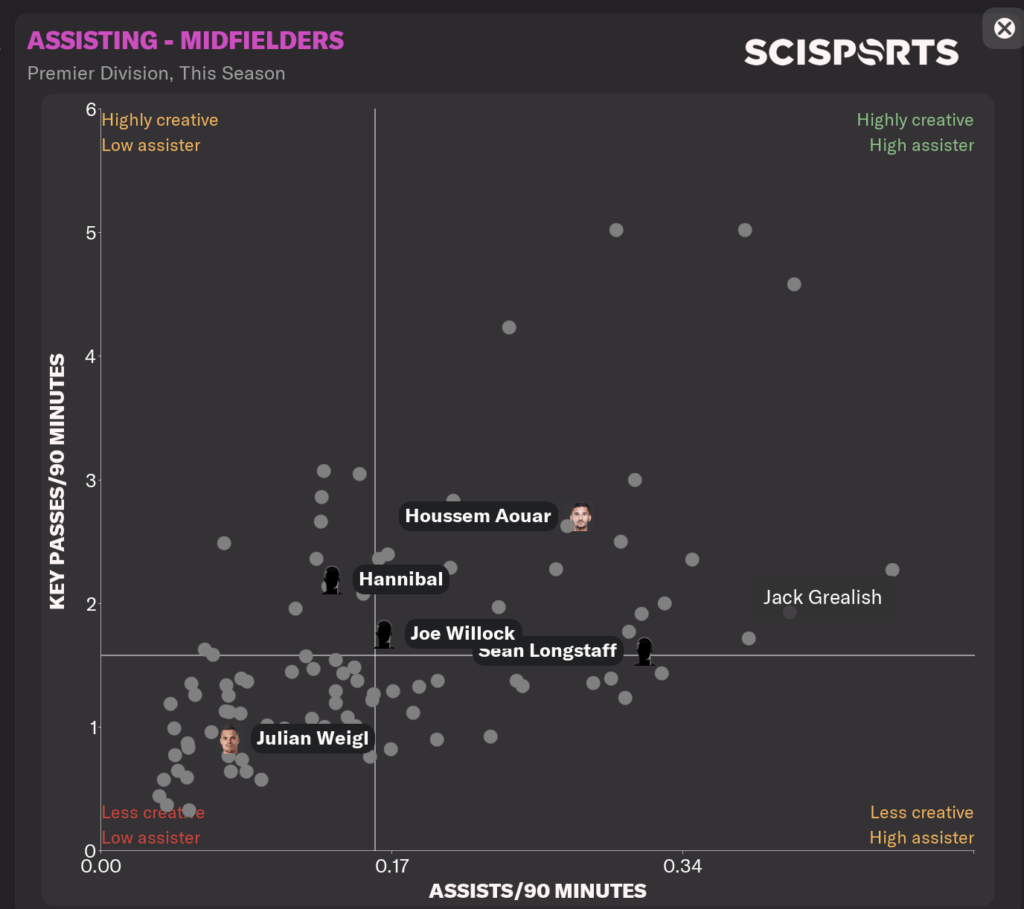 I’m aware that opinion is growing that I’m too sentimental when it comes to my midfielders. That I could idolize Jools Weigl for his cup-winning penalty, or that I could wrap a fatherly, protective wing on Sean Longstaff. To this I say: “Don’t you dare attack me through my brave beautiful boys. I will kill you.”

Sure, there could be better alternatives. But the last long staff standing contributed six assists and an impressively consistent rating average. And I accept that Jools Weigl never gets more than a 6.9, but I see what he does even when you don’t. Joe Willock has slipped a bit this season but hasn’t been bad. And Houssem Aouar was typically great with nine assists and seven goals. And keep an eye on Abdalla Onyango. He’s destined for great things. However, after his mandatory loan at South Shields.

Sigh. Yes, point taken. We have to look at midfield. 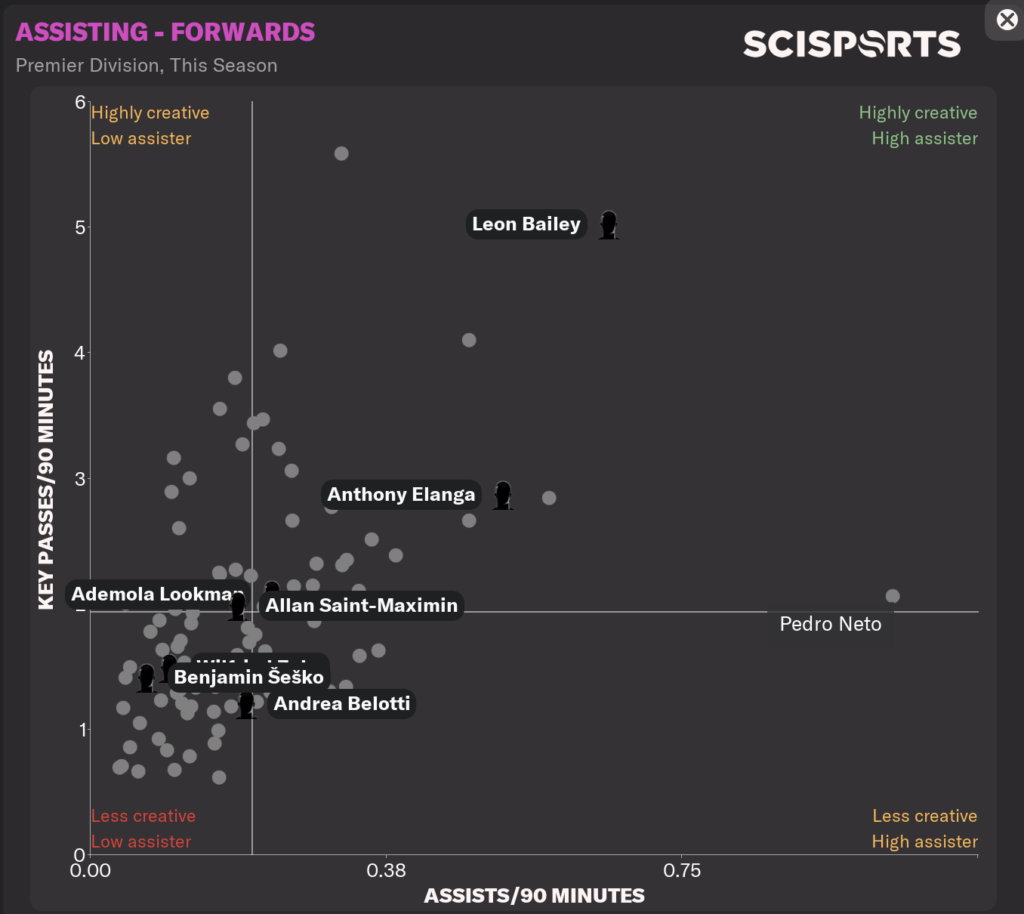 This may have been the season when Leon Bailey arrived as a top-flight footballer, but his demeanor was third-rate at best. His refusal to accept squad rotation was disappointing but I will take a deep breath and accept that 12 goals and 17 assists is reasonable consolation. Ademola Lookman was a handy guy to get off the bench and Antony Elanga, brought in as a versatile substitute (a kind of fast, attacking Mazraoui, if you will), came in handy towards the end of the season.

Others were less impressive. Allan Saint-Maximin was either brilliant or rubbish, while Zaha was almost always the latter. I think the solution here might be to have a more fluid look at the frontline and move players and roles around according to enemies, but I always think of things like this in the summer when it means I don’t really have to do it weekly. 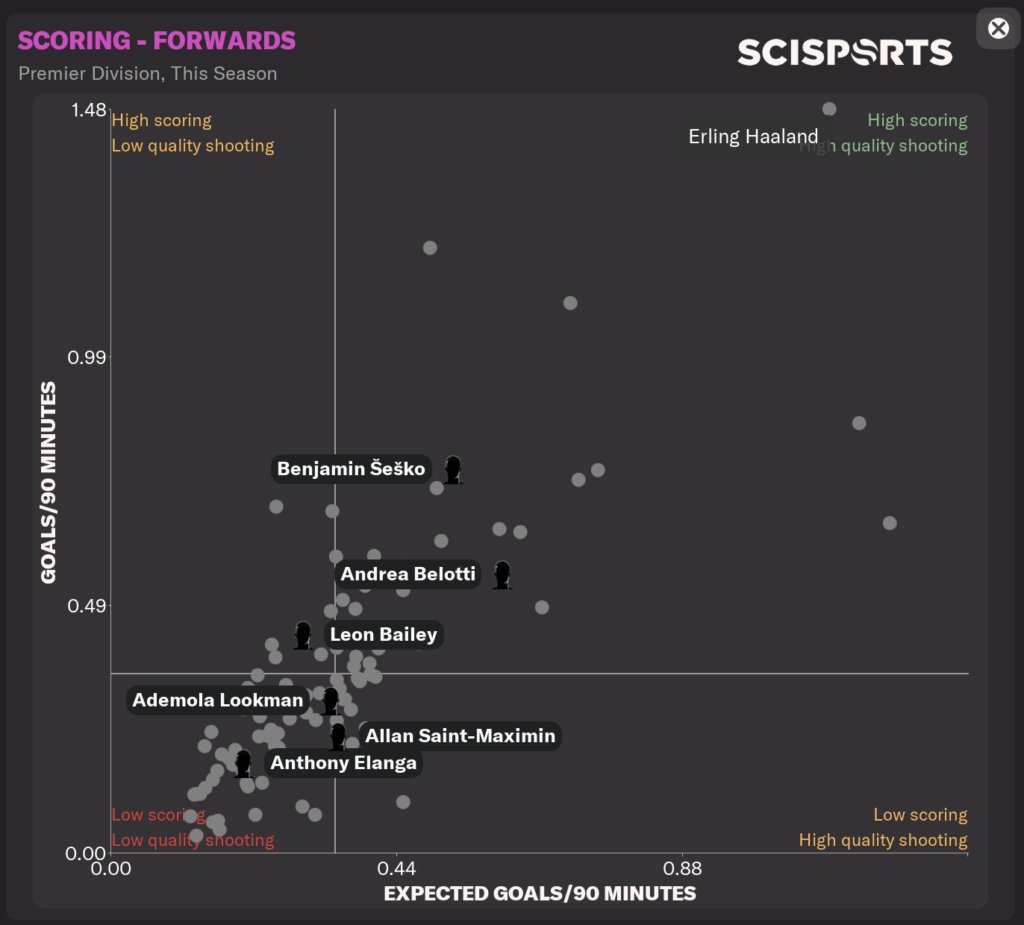 Once again Andrea Belotti was leading but he has been a reduced force this year and that worries me. I can’t complain too much about 18 goals in a season where he’s been rotated heavily, but still… I expected more. Benjamin Sesko had a nice purple patch mid-season and I’m excited to see how it develops this year. Still a bit sad about Belotti.

The board have kindly made £120million available, along with a £600,000-a-week bubble in the payroll budget. Again, that’s far less than the war chests offered to my rivals for a top four spot, but we’ll make do with that. I should be able to get two proven Champions League players for that, maybe even three.

The only question now is: who?

Want more about FM from Iain and his team? Watch his podcast – The Football Manager Show sponsored by Livescore – for free on Apple, Spotify and all major podcast platforms and, of course, ad-free on The Athletic.